The Journal of Interactive Technology and Pedagogy

"Digital Humanities Awards are a set of annual awards where the public is able to nominate resources for the recognition of talent and expertise in the digital humanities community. The resources are nominated and voted for entirely by the public." 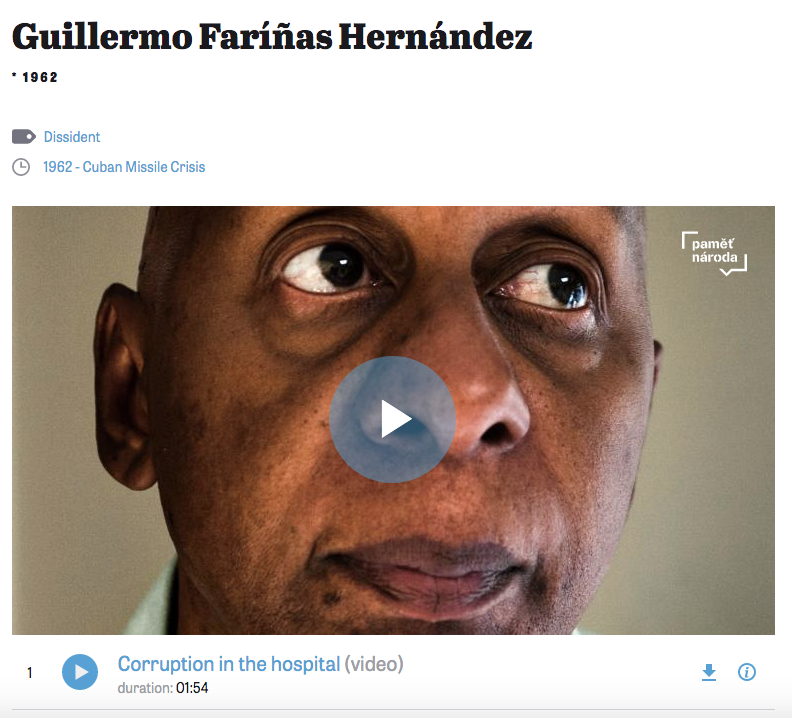 In 2017 the Czech NGO Post Bellum partnered with FIU to record stories of Cuban dissidents and activists who fought for freedom in Cuba. The project was funded by the Ministry of Foreign Affairs of the Czech Republic through the Transformation Cooperation Program and the stories are now available online as part of the Memory of Nations digital collection, which provides access to a database of testimonies and personal memories of the effects of World War II and communism.

"The Environment & Society Portal is a gateway to open access resources about human participation in, and understandings of, the environment. It addresses the community of teachers and researchers in environment-related humanities, as well as the interested public.

The Portal is the digital publication platform and archive of the Rachel Carson Center for Environment and Society (RCC), a nonprofit joint initiative of the LMU (University of Munich) and the Deutsches Museum. As such, it reflects the research themes of the RCC and its fellows, who are international experts in related fields. Fellows are involved in contributing to the Portal and curating its content." 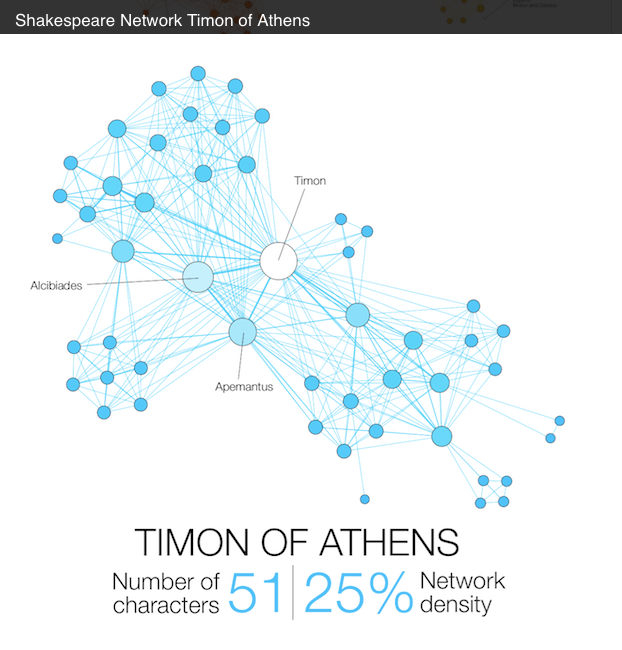 "A network visualization in which each character is represented by a node connected with the characters that appear in the same scenes. The result speaks for itself: the longest tragedy (Hamlet) is not the most structurally complex and is less dense than King Lear, Titus Andronicus or Othello. Some plays reveal clearly the groups that shape the drama: Montague and Capulets in Romeo and Juliet, Trojans and Greeks in Troilus and Cressida, the triumvirs parties and Egyptians in Antony and Cleopatra, the Volscians and the Romans in Coriolanus or the conspirators in Julius Caesar." 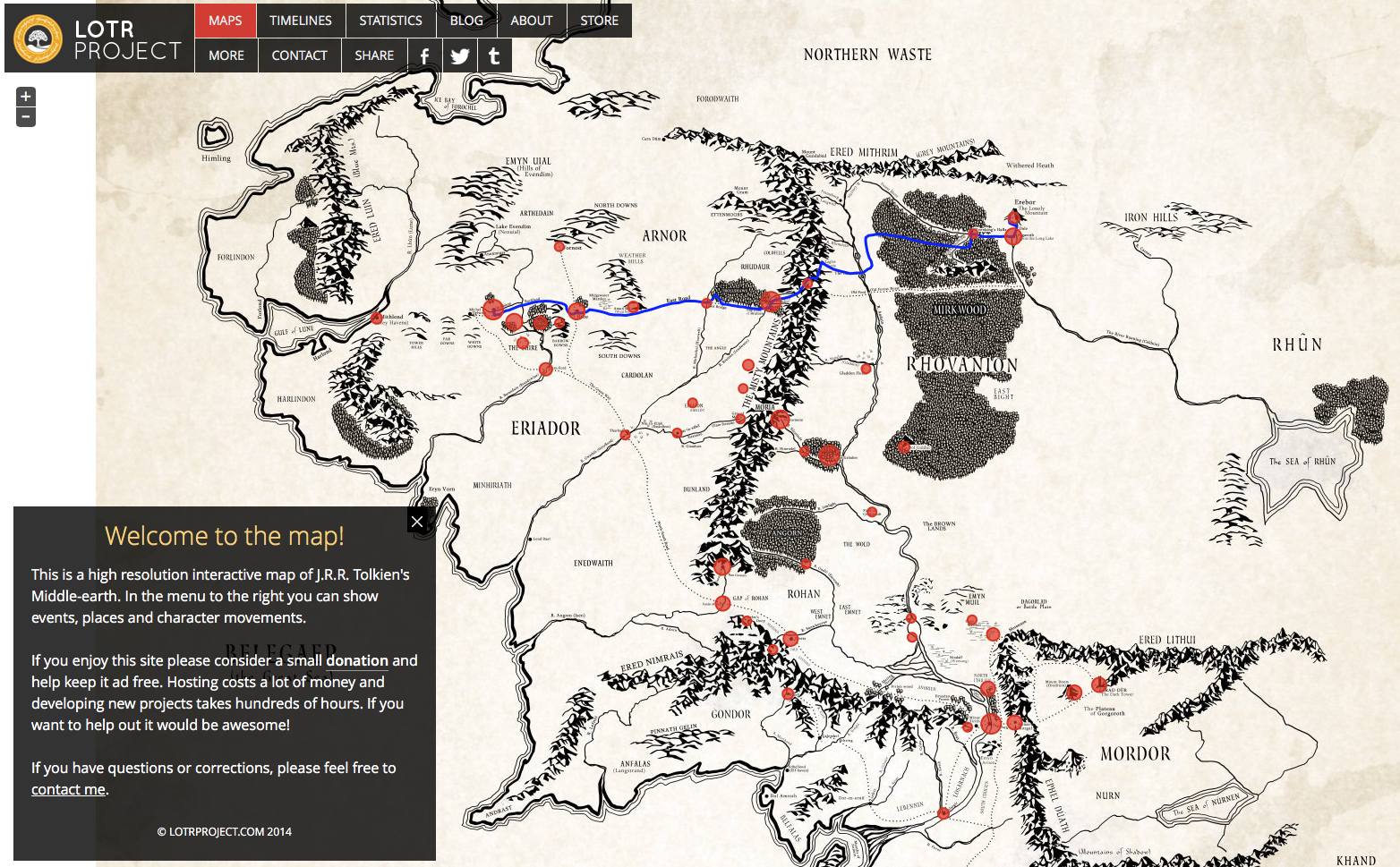 Lord of the Rings Project

"Lord of the Rings Project, commonly shortened LotrProject, is a creative web project dedicated to the works of J.R.R. Tolkien. It is perhaps most known for the extensive and ever updating genealogy, the historical timeline of Middle-Earth and the statistics of the population of Middle-Earth." 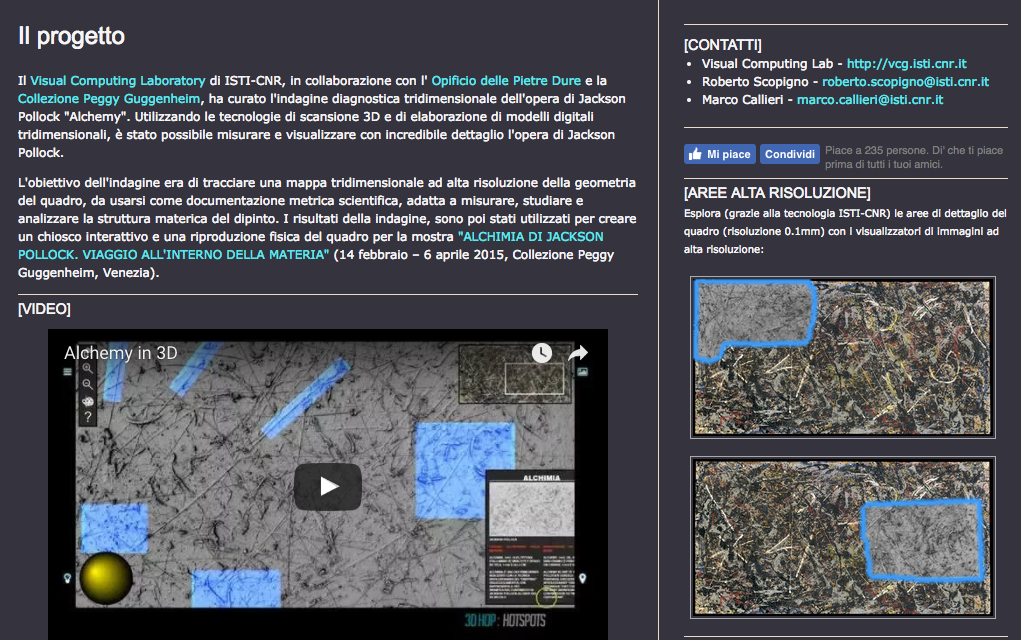 "The Visual Computing Laboratory of ISTI-CNR, in collaboration wih the Opificio delle Pietre Dure and the Peggy Guggenheim Collection, has carried out the three-dimensional diagnostic analysis of the painting "Alchemy" by Jackson Pollock. Exploiting cutting edge technologies of 3D scanning and three-dimensional computer graphics, it was possible to measure and visualize the art of Jackson Pollock with incredible detail.

The aim of the diagnostic action was to create a three-dimensional high-resolution map of the geometry of the painting, usable as metric and scientific documentation, to measure, study and analyze the materic structure of the painting. The results of this digitization has then been used to create an interactive kiosk and a physical reproduction of the painting for the exposition "ALCHEMY BY JACKSON POLLOCK. Discovering the Artist at Work" (February 14 – April 6 2015, Peggy Guggenheim collection, Venice)." 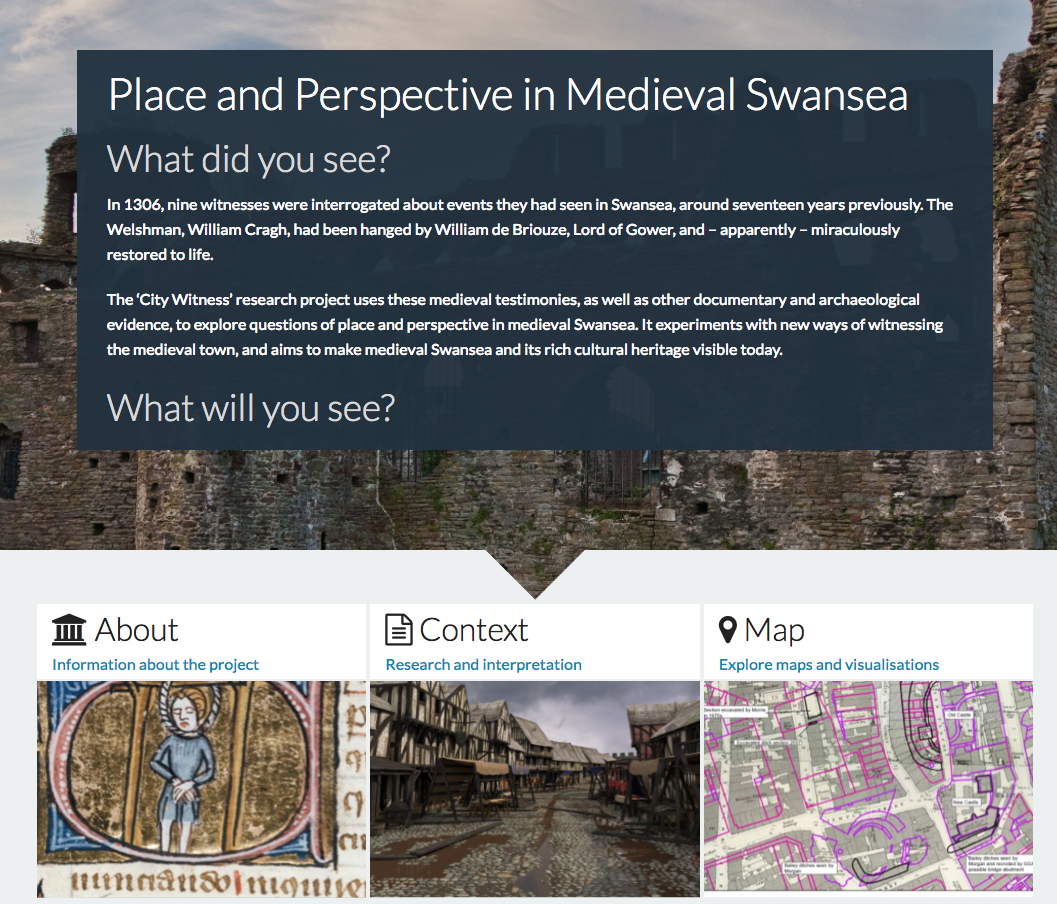 "City Witness is a major, cross-institutional, multi-disciplinary research project, funded by the UK Arts and Humanities Research Council. The initial research phase ran from January 2013 until the end of June 2014, though activities continue beyond this period.

In these pages you can find information about the project, as well as guidance on how you can make use of the City Witness resources." 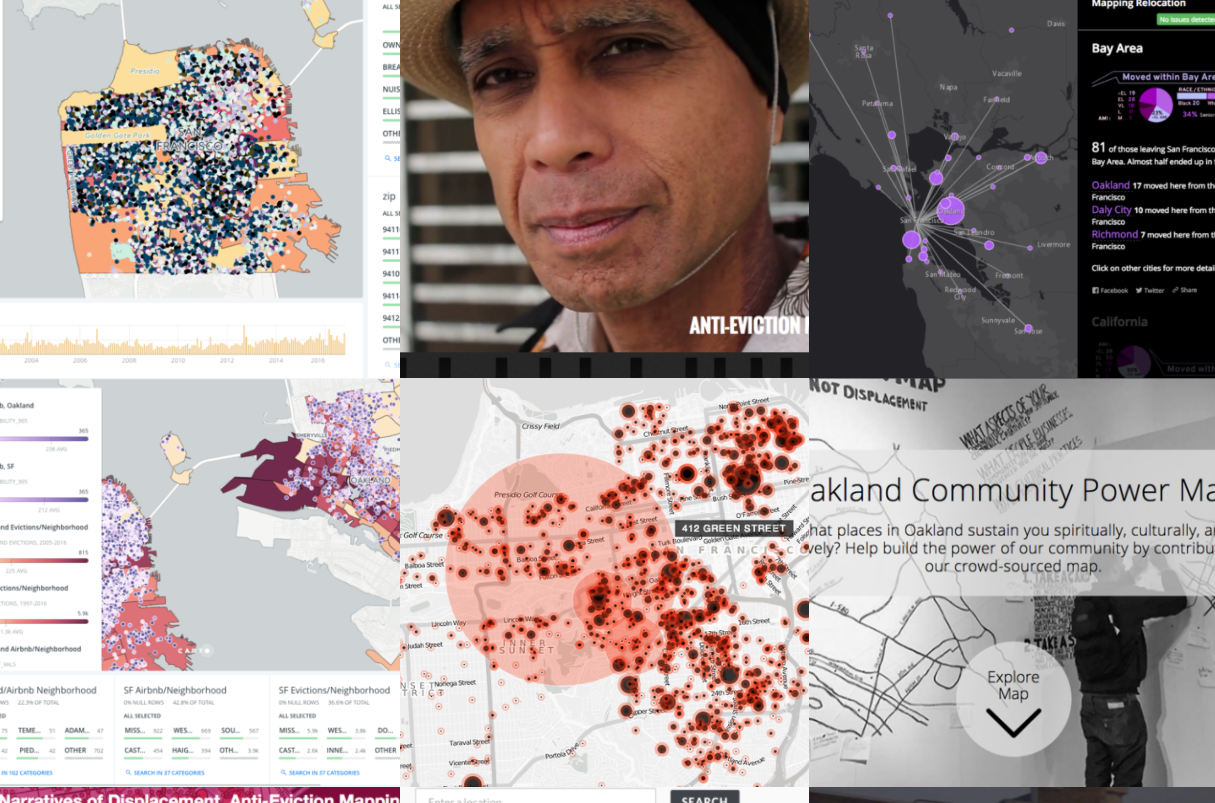 "The Anti-Eviction Mapping Project is a data-visualization, data analysis, and storytelling collective documenting the dispossession of San Francisco Bay Area residents in the wake of the Tech Boom 2.0. Through digital maps, oral history work, film, murals, and community events, the project renders connections between the nodes and effects of new entanglements of global capital, real estate, high tech, and political economy. It studies the displacement of people but also of complex social worlds as certain spaces become desirable to such entanglements. Maintaining antiracist and feminist analyses as well as decolonial methodology, the project creates tools and disseminates data that contributes to collective resistance and movement building." 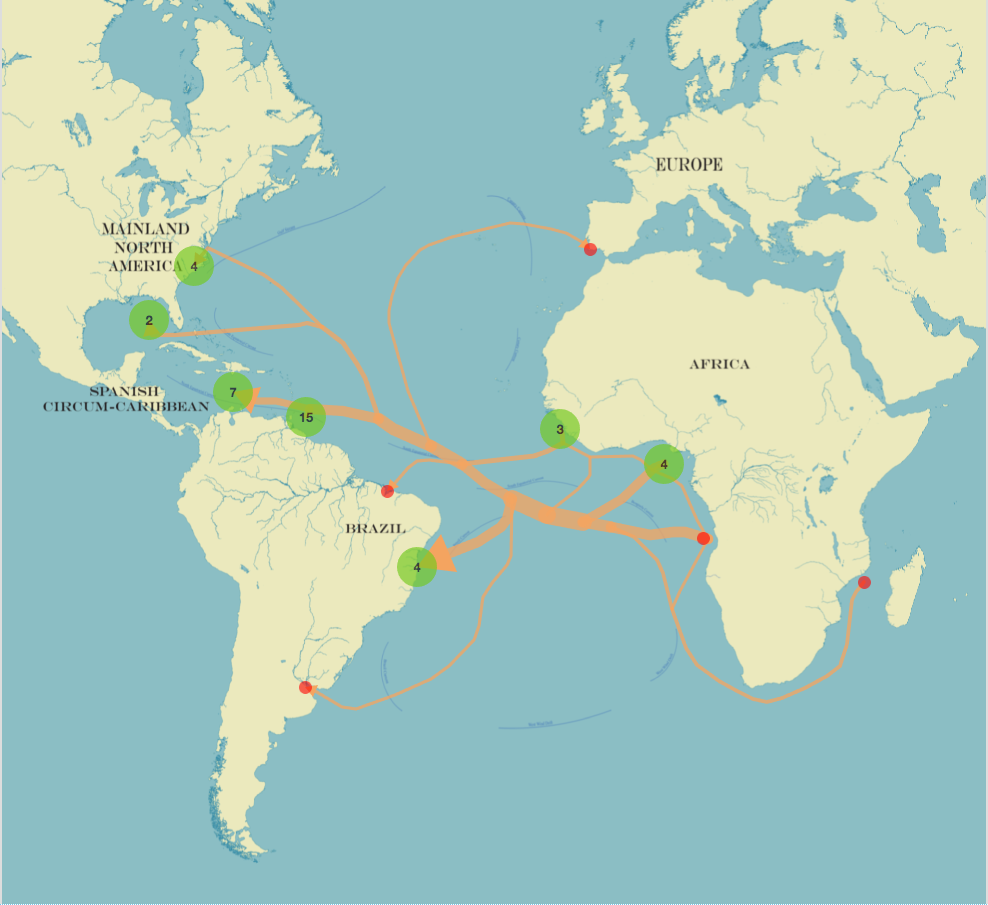 "The Trans-Atlantic Slave Trade Database is the culmination of several decades of independent and collaborative research by scholars drawing upon data in libraries and archives around the Atlantic world. The Voyages website itself is the product of two years of development by a multi-disciplinary team of historians, librarians, curriculum specialists, cartographers, computer programmers, and web designers, in consultation with scholars of the slave trade from universities in Europe, Africa, South America, and North America. The National Endowment for the Humanities was the principal sponsor of this Emory University Digital Library Research initiative. The W.E.B. Du Bois Institute of Harvard University and the Wilberforce Institute for the Study of Slavery and Emancipation of the University of Hull have also supported its development." 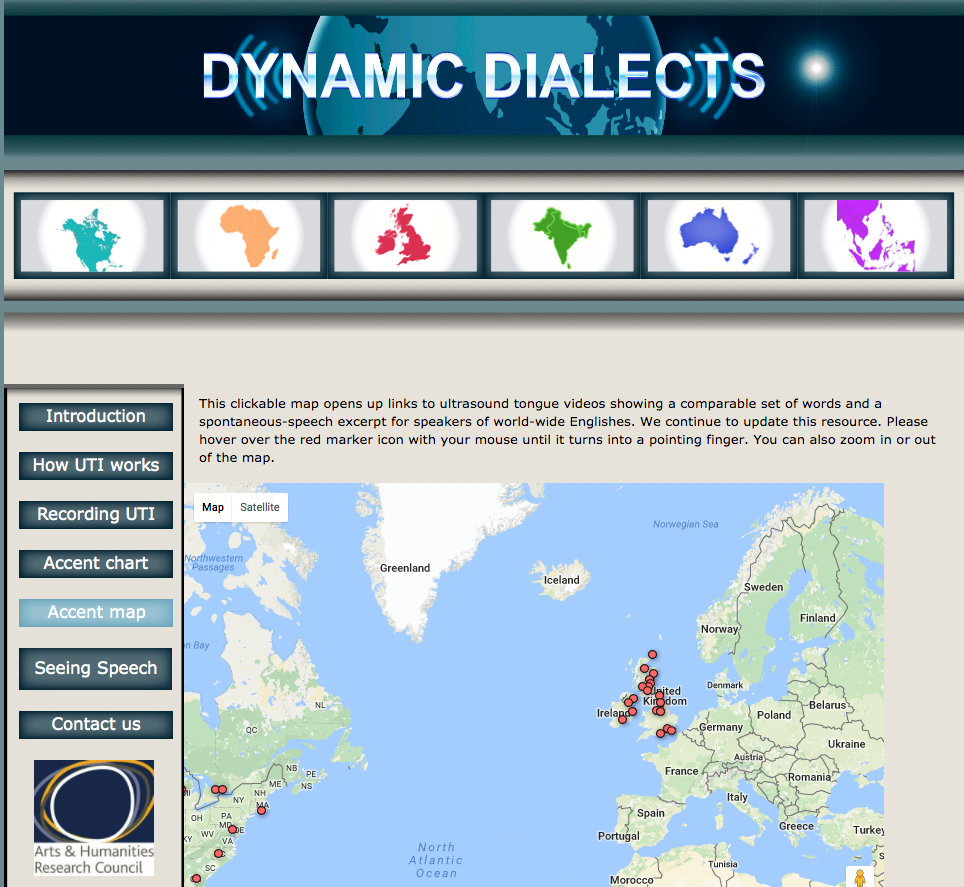 "Dynamic Dialects is the product of a collaboration between researchers at the University of Glasgow, Queen Margaret University Edinburgh, University College London and Napier University, Edinburgh. Dynamic Dialects is an accent database, containing an articulatory video-based corpus of speech samples from world-wide accents of English. Videos in this corpus contain synchronised audio, ultrasound-tongue-imaging video and video of the moving lips. We are continuing to augment this resource. For modelled International Phonetic Association speech samples produced by trained phoneticians..." 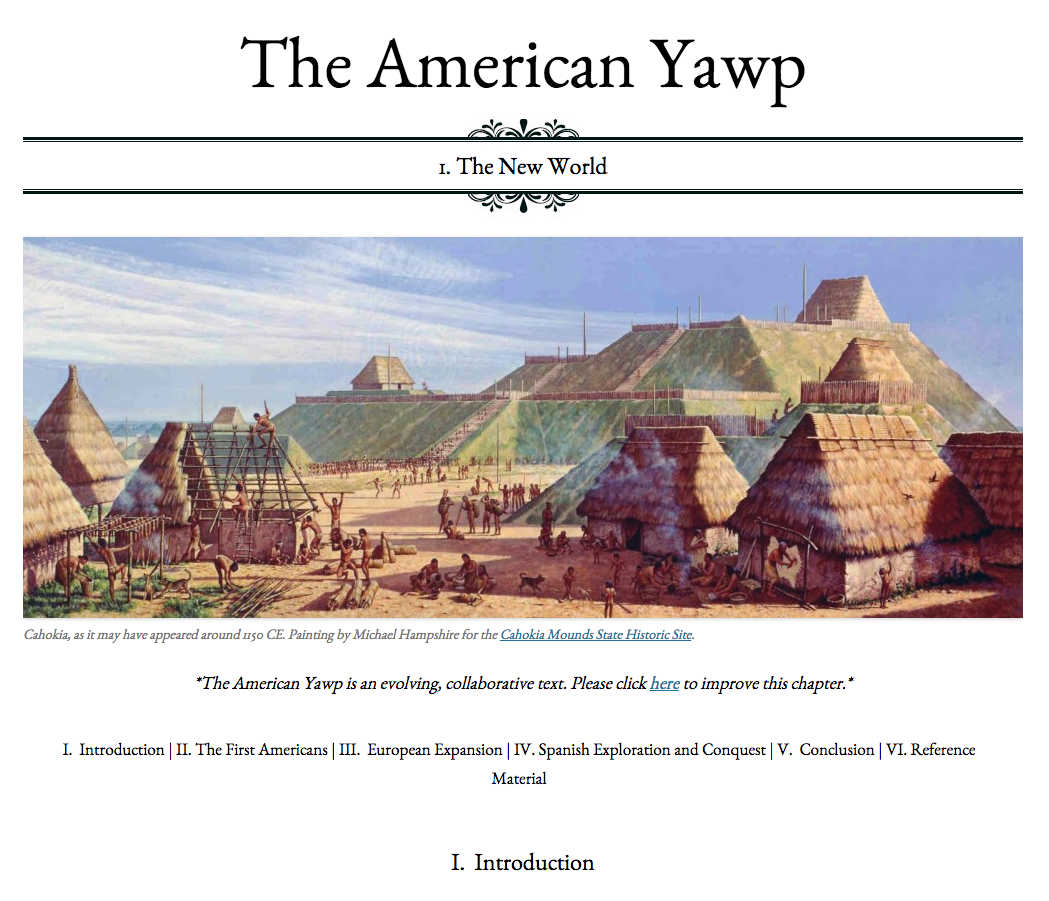 "In an increasingly digital world in which pedagogical trends are de-emphasizing rote learning and professors are increasingly turning toward active-learning exercises, scholars are fleeing traditional textbooks. Yet for those that still yearn for the safe tether of a synthetic text, as either narrative backbone or occasional reference material, The American Yawp offers a free and online, collaboratively built, open American history textbook designed for college-level history courses. Unchecked by profit motives or business models, and free from for-profit educational organizations, The American Yawp is by scholars, for scholars. All contributors—experienced college-level instructors—volunteer their expertise to help democratize the American past for twenty-first century classrooms." 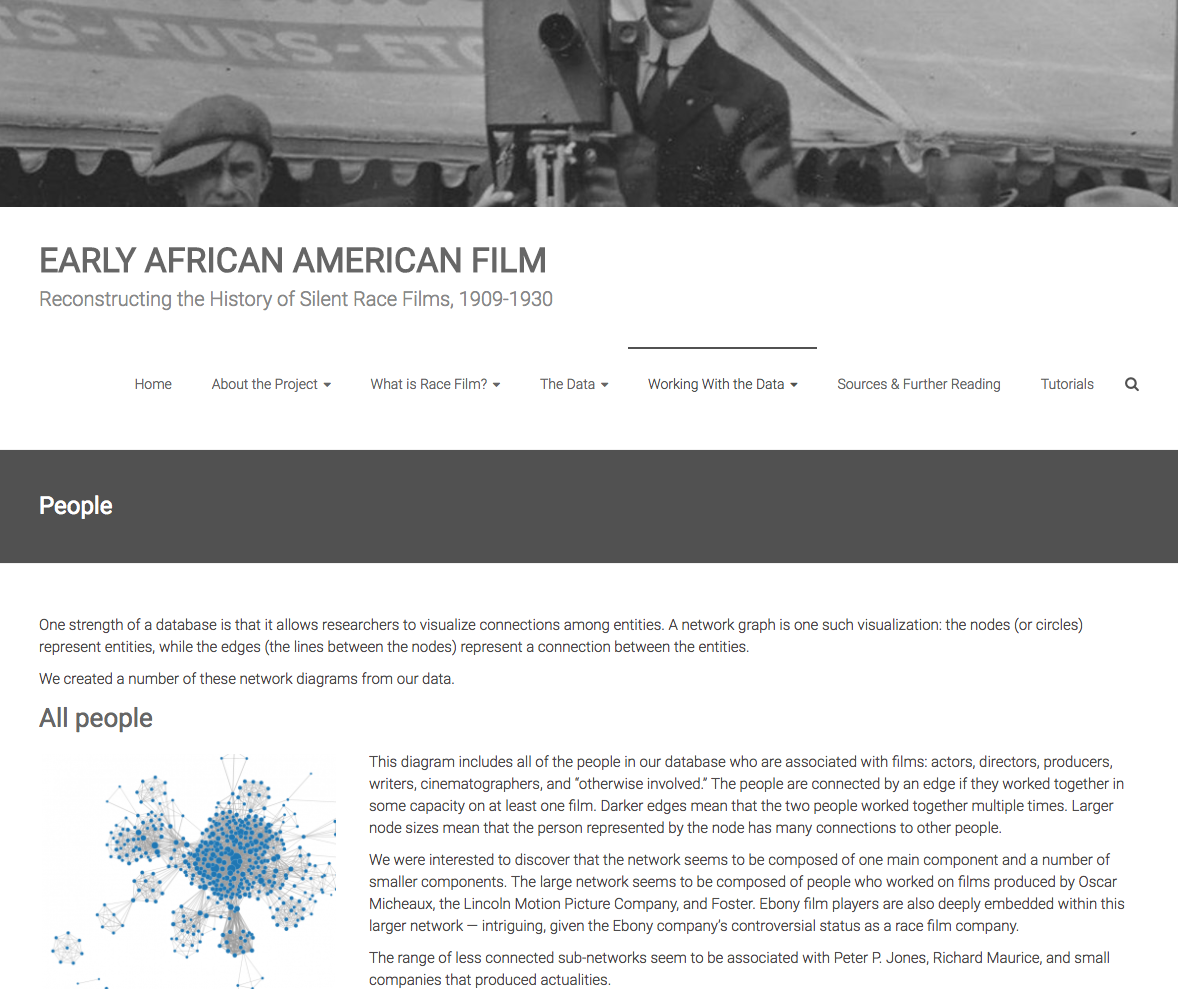 "... [The] main goal of this project was to collaboratively create a database on early African-American silent race films by drawing together information in a wide range of primary and secondary sources. For the purpose of this project, we determined that we would only include silent films created before 1930 for African-American audiences. This definition was the main factor that informed our decisions to include or exclude pieces of data." 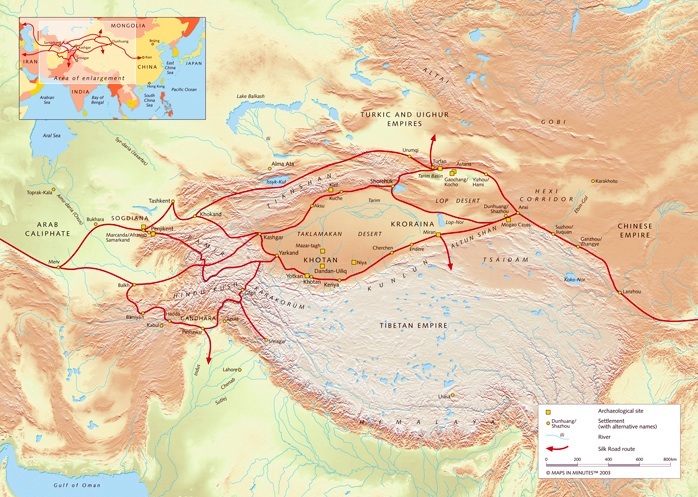 "Little was known of the remarkable heritage of the Silk Road until explorers and archaeologists of the early twentieth century uncovered the ruins of ancient cities in the desert sands, revealing astonishing sculptures, murals and manuscripts. One of the most notable discoveries was the Buddhist cave library near the oasis town of Dunhuang on the edge of the Gobi desert in western China. The cave had been sealed and hidden at the end of the first millennium AD and only re-discovered in 1900. Forty thousand manuscripts, paintings and printed documents on paper and silk were found in the cave itself. Tens of thousands more items were excavated from other Silk Road archaeological sites." ... "IDP is a ground-breaking international collaboration to make information and images of all manuscripts, paintings, textiles and artefacts from Dunhuang and archaeological sites of the Eastern Silk Road freely available on the Internet and to encourage their use through educational and research programmes." 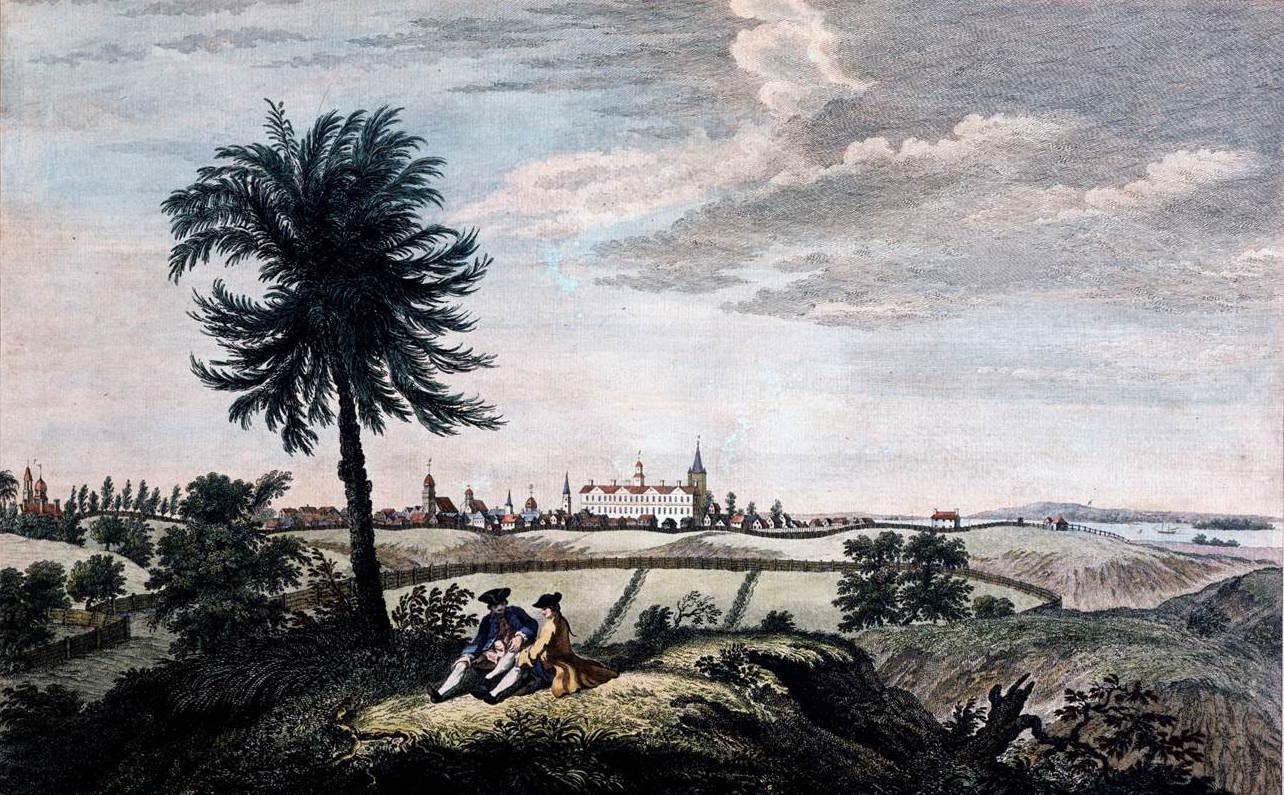 "The Columbia University and Slavery project explores a previously little-known aspect of the university’s history – its connections with slavery and with antislavery movements from the founding of King’s College to the end of the Civil War. Pulitzer Prize-winning History Professor Eric Foner led a research course in the spring of 2015 on the role of slavery in Columbia’s early history. At the end of that spring semester, Foner’s class of undergraduates presented their novel findings to both their professor and President Lee C. Bollinger. From those discussions, the Columbia University & Slavery project was initiated to draw on further research to be conducted by faculty and students. Student work was continued in the spring 2016 and 2017 courses under Thai Jones, Department of History Lecturer, and Karl Jacoby, Professor of History, with the resulting student and faculty research added to this website."